The closed-door seminar brought together more than 35 experts, including diplomats, representatives from international organizations, policy makers and academics, among them the UN Under-Secretary General, Abdoulaye Mar Dieye. The event was organized by CIDOB (Barcelona Center for International Affairs) in collaboration with adelphi and the European Center for Development Policy Management.

The Sahel is one of the regions most affected by the effects of climate change worldwide. A more or less direct link is often established between global warming and the unstable situation in the area. However, it is not easy to disentangle the role of climate change in relation to high levels of food insecurity, the proliferation of violence and conflict and its relationship with migration. 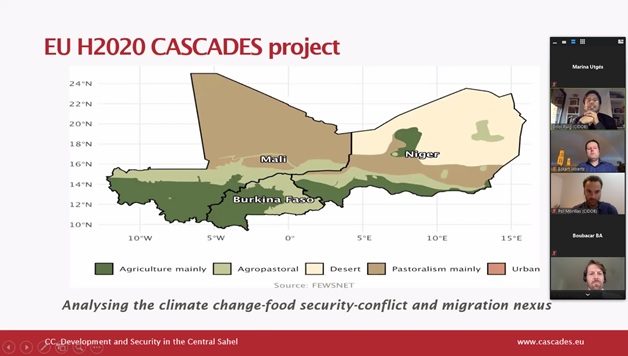 Oriol Puig, researcher at CIDOB and Adrien Detges, researcher at adelphi, presented the recently published case study on the Central Sahel, whose main objective was to analyze climate change, food security, conflict, migration and security in the region. In conclusion, the team noted that, although the links between climate shocks and security risks are indirect, climate change could aggravate food insecurity, affecting the most vulnerable regions and populations. Risks can be mitigated with appropriate policies, such as climate adaptation, social and security measures. Short-term effects of isolated events may be minimal, but latent and long-term effects, as well as repeated events, must be taken seriously.

During the event, the video “Climate Emergency in the Central Sahel”, produced by CIDOB in collaboration with Revista 5W, was presented.

This informative video (EN / FR / ES) presents the current situation in the region, the effects of climate change and how it affects security and development in the region.

Following this, an hour-long debate with the invited experts took place, using the presented research as a basis on which to reflect and redefine public policies in the Central Sahel at all levels.

Climate Change, Development and Security in the Central Sahel

Climate change and resilience in the Central Sahel

Behind CASCADES: Episode One