The societies of Europe and the Middle East and North Africa (MENA) are historically, socially and economically intertwined. Climate change presents a shared and urgent challenge. Stretching from Morocco in the west to Syria in the north, Iran in the east and Yemen in the south, the MENA region covered by this report comprises 19 countries and is home to an estimated 472 million people, with a fast-growing young population. Conditions are diverse with some nations registering among the highest national income per capita in the world (e.g. Qatar, Kuwait, UAE) while others are low-income, conflict-affected societies, where human displacement and extreme poverty are rife (e.g. parts of Syria, Iraq, Yemen, the Occupied Palestinian Territories and Libya).

The MENA region is exposed to physical climate impacts that threaten human life and political stability on several fronts. Water and agricultural production are particularly sensitive to the extremes of global warming, given the region’s already arid and semi-arid climates. Sea level rise threatens rapidly expanding urban and industrial coastlines over the next century and most cities are ill-prepared for the ravages of cyclones, sand storms and flooding. Humidity may become the most serious challenge to human life, especially for coastal cities. 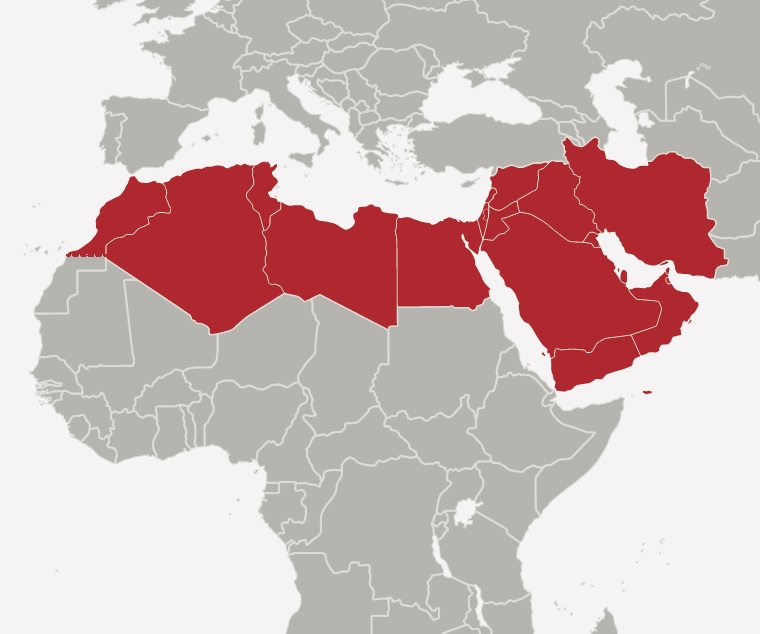 Climate change is already interacting with more immediate threats from armed conflict, environmental degradation, corruption and social and gender inequalities. Such compound conditions have worsened the humanitarian fallout from flooding in war-torn Yemen and facilitated extremist militant recruitment in drought-affected northern Iraq. Across the region, the role of long-term environmental mismanagement in worsening the impacts of climate change is brutally clear.

How communities and governments respond to evolving climatic conditions will affect the severity of effects that cross borders and continents, ‘cascading’ into European societies. As witnessed with forest fires in Lebanon in 2019 and recent water shortages in Iraq, Iran and Algeria, government failure to deal with environmental stress can trigger violent, potentially revolutionary, protests. Figure 1 illustrates variation in the capacity to cope with and adapt to climate threats. While all countries are challenged by their levels of fresh water relative to population and none are ranked as politically ‘sustainable’, some have a larger economic cushion to enable adaptation than others. The countries towards the right of the figure, affected by war and economic crisis, are the most vulnerable.

At the same time, climate change policies and rapidly changing costs of technology will alter oil- and gas-dominated trade relationships with MENA countries. Europe’s demand for petroleum imports is set to decline and new regulations for green growth and alignment with the Paris Agreement goals will affect imports and foreign investment. As Figure 2 shows, most countries would not be able to sustain their current economies for long with oil prices below
$50/barrel. These present both challenges and opportunities for MENA countries and several are pursuing long-term visions for economic diversification, the success of which will depend on new investment and trade relations.

The MENA region already imports more than 50 per cent of its food and will require increasing foreign exchange to meet growing demand. Meanwhile, sensitivity to food price rises due to, for example, droughts in other parts of the world, is high. 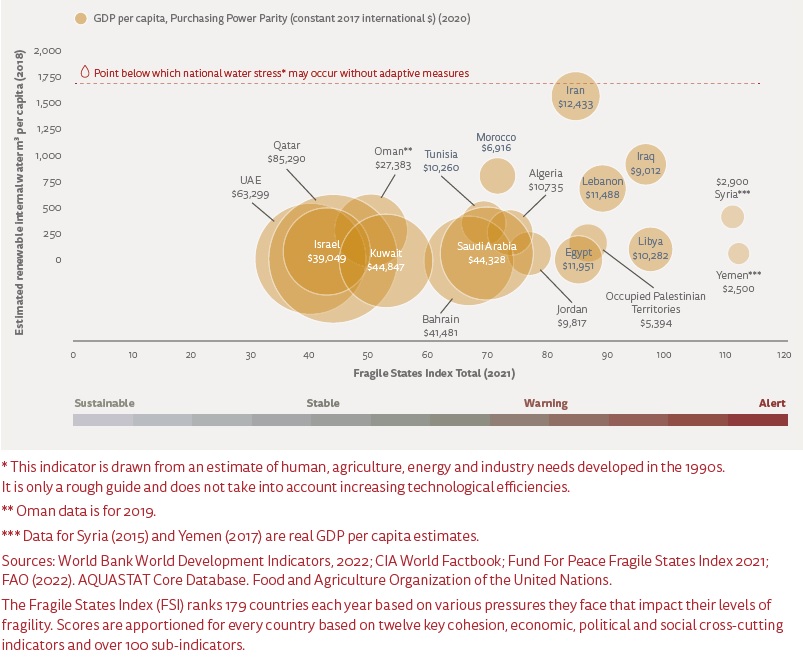 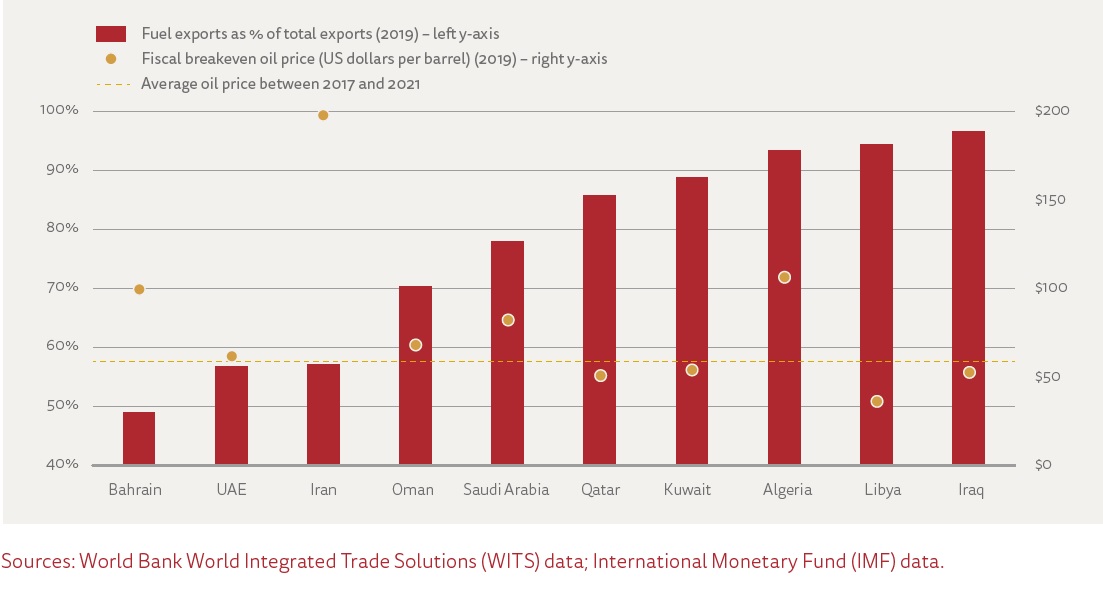 Climate resilience strategies, green economic diversification and investment in long-term adaptation are critical to achieving sustainable peace and prosperity in the region. The European Union (EU) and European countries can harness existing relationships, investments and capacities to contribute to this effort. These range from the EU’s evolving neighbourhood partnerships, humanitarian assistance and development bank lending to traditional bilateral diplomacy, trade agreements and engagement with UN bodies. The EU is already extending the principles of its Green Deal to partnerships in its Southern Neighbourhood with reinvigorated commitment to green transition and climate resilience through the Agenda for the Mediterranean. With a fast-changing combination of conditions intersecting with climate change, EU institutions and businesses will need to both learn lessons from the past and anticipate new realities on the ground.

The purpose of this report

This report assesses the current situation and future projections of possible and likely biophysical climate impacts in the MENA region, based on a literature review, news articles and CASCADES climate impact data analysis.

The authors adopt a water–food–energy nexus perspective, given that this resonates with environmental interests in the region. However, this concept remains open to new understandings that put a greater emphasis on ecosystems and well-being – for example, air quality, biodiversity and nutrition. Irrigation for crops and agricultural processing, water for energy, energy for potable water as well as oil and gas revenues to pay for food imports are some of the dependencies that climate change is challenging in the region. These are also some critical areas offering opportunities for resilience-building.

Scenarios illustrate ways in which climate impacts in the MENA could compound other stresses and cascade, with effects that cross borders and affect Europe and European interests. Figure 3 shows a generic example of cascading risks. We highlight five subregions: Iraq (with relevance for Iran and Syria), North Africa, the Jordan Valley, the Nile and the Gulf Cooperation Council countries. Sister CASCADES studies on the Euphrates–Tigris Basin and North Africa, which are referred to in this study, provide more insight. The purpose of the scenarios is to enhance understanding of how resilience and adaptive actions might help to mitigate risks and limit the scope of harm that climate impacts could set in motion.

Figure 3. An example of climate-related risks in the MENA that can cascade across borders 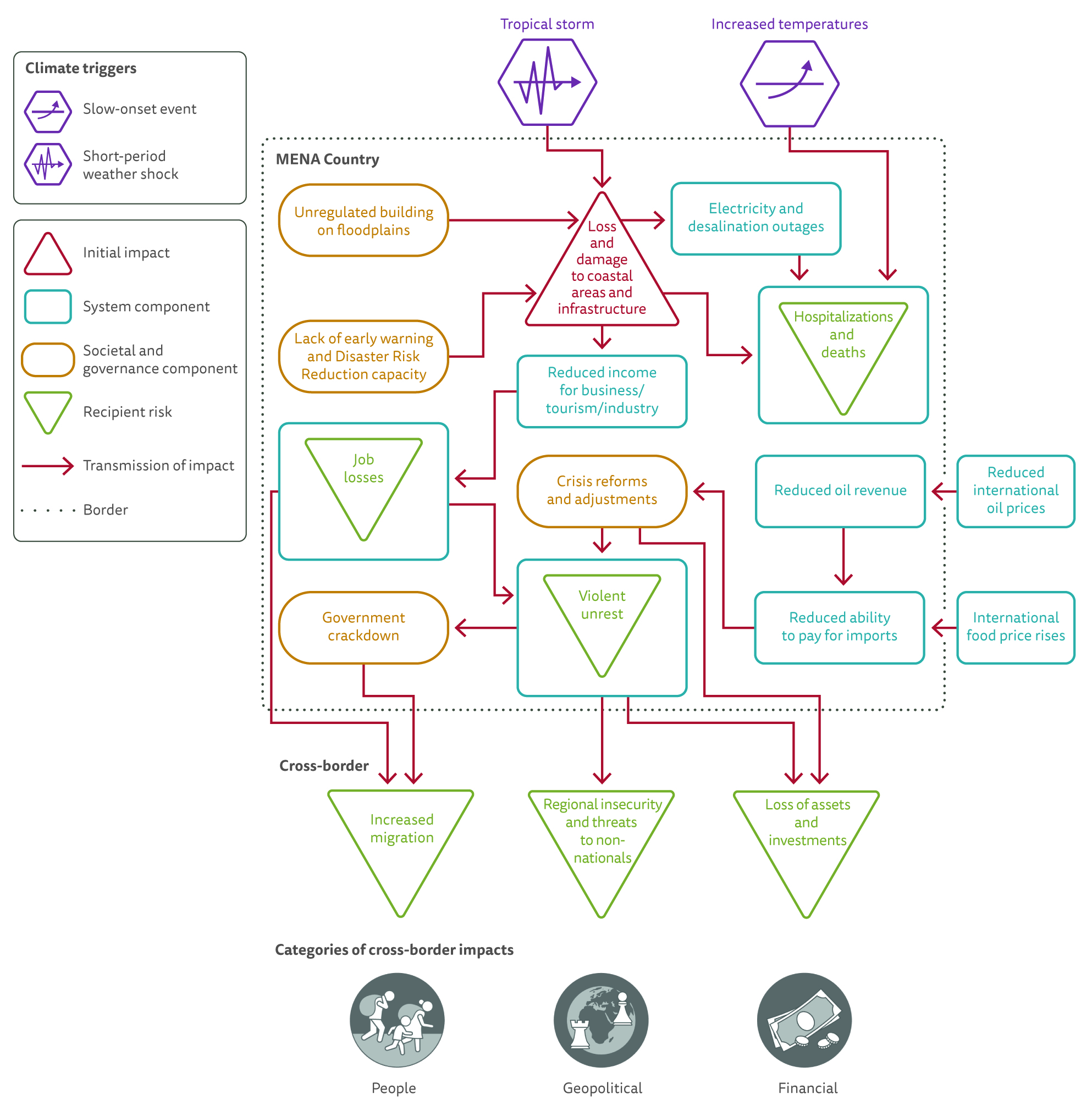 Research benefited greatly from a series of interviews and workshops with regional
experts. There are significant geographical, climatic and political differences between the subregions and within several countries. As such, this can only be a broad-brush introduction to the changes taking place and their interactions with ongoing resource and societal issues. The views and opinions of experts in the region have shaped the report’s discussion of vulnerability and resilience factors, the scenarios for the future and the recommendations.

Climate impacts are damaging human security in the MENA, yet resilience to climate change has been low on most public and political agendas. Climate change, particularly in the form of drought, flooding and storms, is already threatening lives and economies. The water and agricultural crises in Iraq are a case in point. Authorities and people in the region have generally not considered climate change and environmental health urgent issues, given more immediate threats of war, poverty, unemployment and human rights abuses. However, this is changing. In Oman, for example, cyclone devastation has spurred greater attention to disaster risk reduction (DRR) preparation for climate change. Civil society, particularly in parts of the Levant and North Africa, is increasingly vocal on environmental issues, often tackling them through a heritage conservation, local economy or social justice lens.

The two upcoming climate summits (COP27 and COP28) to be hosted by Egypt and the UAE, and the Saudi-led Middle East Green Initiative provide platforms for stronger cross-regional coordination and international partnerships.

Over the next 30 years, current water use, agricultural and building practices will become untenable; beyond 2050, liveability in the MENA region will be determined significantly by our global emissions trajectory. Irrespective of mitigation, cumulative emissions mean that the current warming trajectory will continue until at least around mid-century. While there are fewer long-term projections focusing on a 1.5°C scenario, this would suggest a far less damaging prospect for MENA countries than 2°C+, given existing aridity and coastal exposure. The extent of coastal land mass loss through sea level rise in this century will largely be determined by these trends.

Local and regional treatment of the environment is integral to climate risks. In all cases, local human developments and practices such as the density of population, overgrazing and monocropping, urban development on floodplains, damming of rivers, land reclamation and destruction of natural barriers such as mangroves and deforestation affect the vulnerability and severity of impact of climate-related events. At the same time, governance factors such as lack of transboundary water management systems, insufficient rule of law and military occupation affect a society’s ability to take resilience and adaptation measures.

Without effective measures, climate impacts will compound local vulnerabilities and have severe consequences for human lives, livelihoods, economies and security in the region. For example, in the absence of radical changes in water management and food production methods, competition among water users will grow and food security will diminish. While poorer and conflict-affected countries remain the most vulnerable, richer ones also face high risks.
Transition risks will be at least as important as physical climate risks for economies depending on oil and gas export revenues. The sensitivities of failing public services including water provision and electricity, combined with higher food prices and declining ability to pay for imports, could lead to political instability (as shown in Figure 3).

Cascading risk scenarios show how climate impacts in the MENA could affect EU interests, including the prospects for peace, development and business investments, expatriate workers, migration flows, human rights and the demand for international humanitarian aid. They also suggest how things might play out differently depending on national, regional and international factors, which will determine the ability to cope with and adapt to climate stresses. Three broad medium-term meta scenarios – stagnation, fragmentation and cooperation – suggest different outcomes (see Figure 4). The actions of major powers, including the EU, will strongly influence how these factors evolve. More concerted, thoughtful diplomacy is essential to reduce conflict and to address shared environmental issues.

Figure 4. Meta scenarios for 2025–2035 which would affect countries’ ability to respond and adapt to climate change 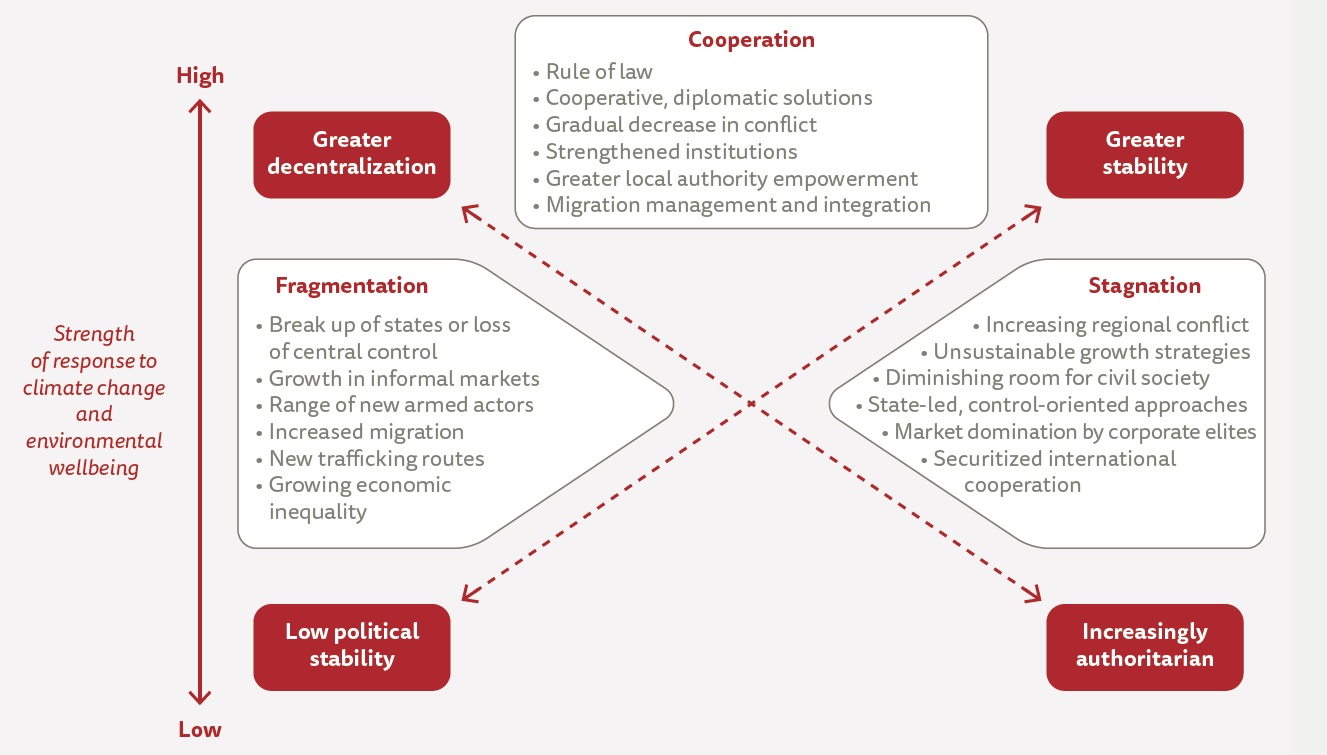 In early 2022, the Sixth Assessment Report (AR6) of the Intergovernmental Panel on Climate Change (IPCC) made clear that the window of opportunity for climate resilient development is closing and will require transformative adaptation measures. This report identifies urgent priorities for the MENA region in the areas of improving water management, regeneration of landscapes and infrastructure resilience. National stakeholders and their international partners cannot address these effectively without acting within the wider political and economic context to strengthen sustainable peace and good governance.

Firstly, climate resilience and adaptation projects must include co-benefits that meet immediate country needs and align with national aspirations.

Secondly, given the transboundary nature of many of the risks we discuss above, planners should consider how measures might promote greater cooperation. This could be through knowledge sharing and technical exchanges, infrastructure that benefits more than one country, cross-border community land restoration and joint early warning systems and DRR cooperation.

Exploring future scenarios can improve understanding of how climate impacts might interact with societal dynamics, and suggest how investments might foster better conditions for long-term adaptation. For example, a particular challenge noted by regional experts was the lack of enablement at municipal, civil society and micro- to-medium-sized enterprise levels. The immense human capacity of the region, fully inclusive of women and youth, will be essential to address climate and environmental challenges nimbly, and with greater co-benefits for societal well-being.

The report makes six recommendations for EU approaches in the region. The EU should: