Cascading Climate Risks: Perspectives From Around the World, held on Monday 1st November in Chatham House’s Climate Risk and Security Virtual Pavilion, in partnership with Adaptation Without Borders, showcased stories and case studies of cross-border climate risks from regions around the world, cutting through their complexity and revealing their impacts in real terms.

Tabby Njung’e of the Justdiggit Foundation shone a light on Kenya’s reliance on pharmaceutical imports from India, while Magnus Benzie of CASCADES and SEI pointed to Jamaica’s dependence on maize imports from the United States. ICIMOD’s Arun Shrestha showed how glacial lake outburst floods originating in Tibet can impact Nepal, and Sarah Opitz Stapleton of ODI highlighted transboundary risks to pastoral livelihoods in West Africa. Hanne Knaepen of CASCADES and ECDPM considered the challenges to adaptation in Tunisia’s agri-food system – and the implications for Europe. 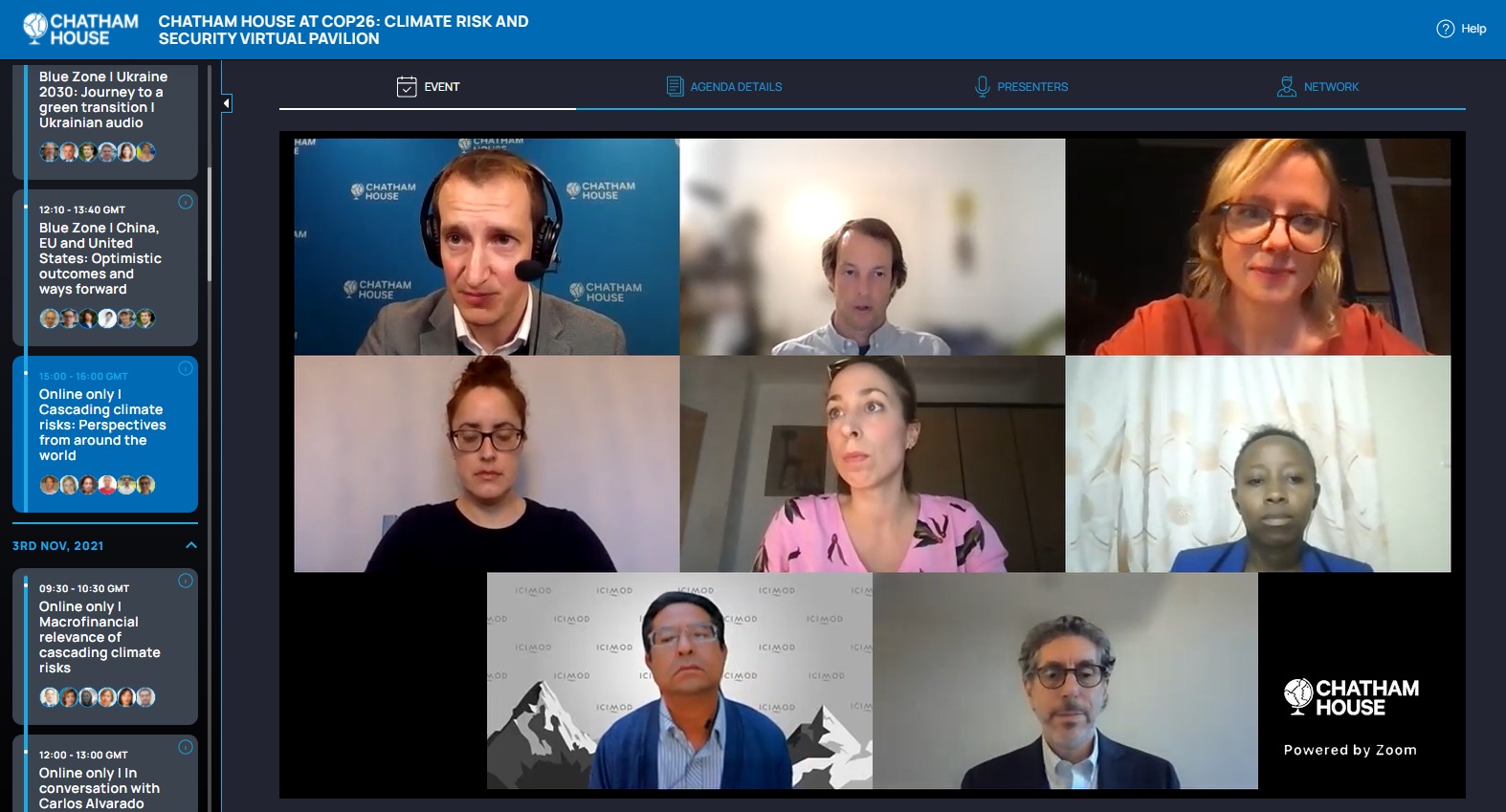 The session ended with a discussion of how countries can come together to address these issues. Prabhakar SVRK of the Institute for Global Environmental Strategies talked of the need to reboot regional blocs such as ASEAN to make them fit for purpose in the age of climate change; Joe Siegel of Mediators Beyond Borders International explored the opportunities for multilateral cooperation within the UNFCCC. 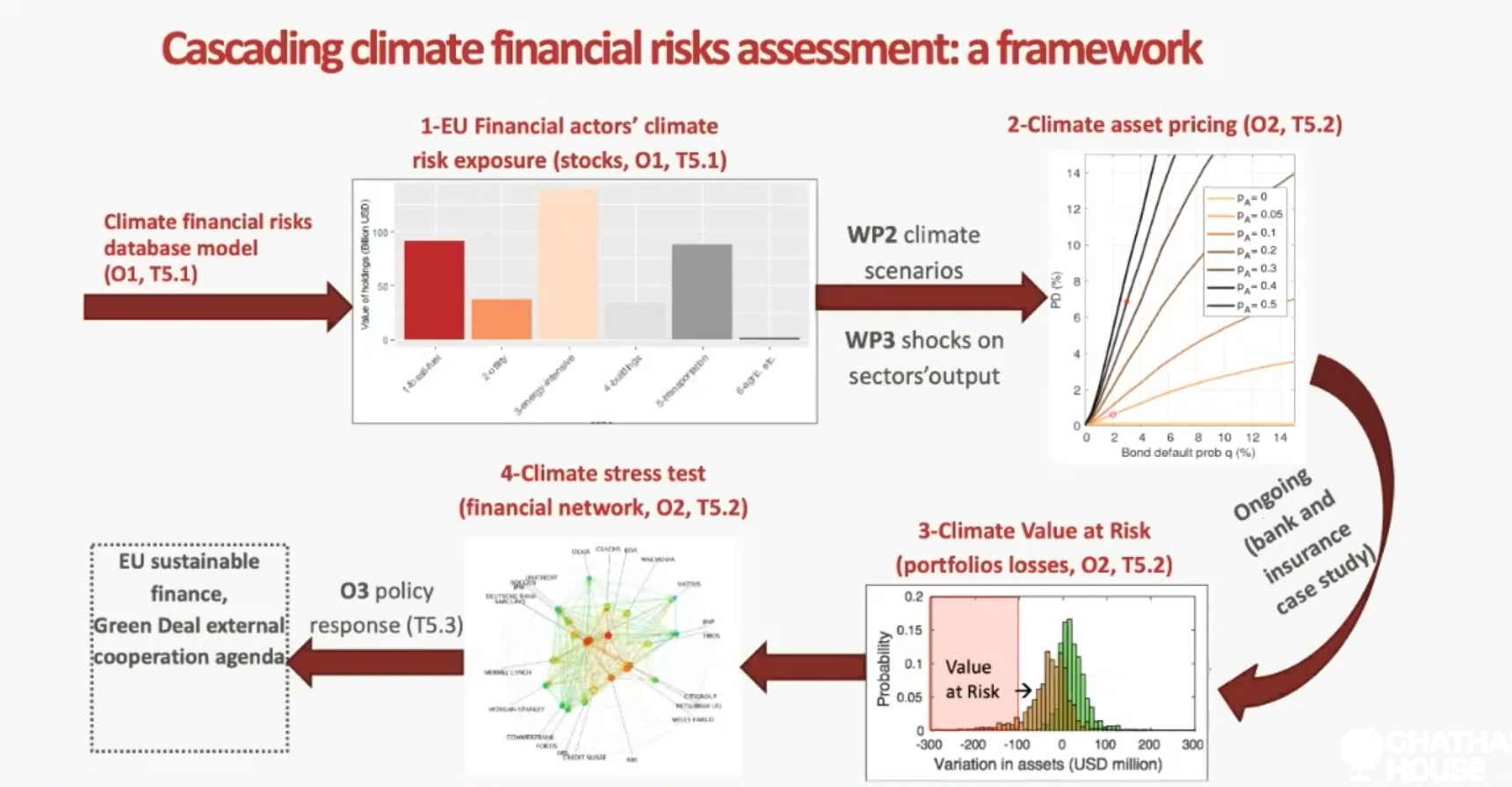 CASCADES’ Irene Monasterolo chaired the session. Sanja Madzarevic-Sujster of the World Bank began by emphasising the role of the best possible information in ensuring that private and public actors are able to design appropriate disaster financial risk management frameworks.

Romain Svartzman of the Banque de France expressed concern that large parts of developed economies are operating on the basis that they are ‘safe’ from climate change. He asked how central banks and financial supervisors can make best use of cascading approaches to address this complacency and mitigate systemic risk. 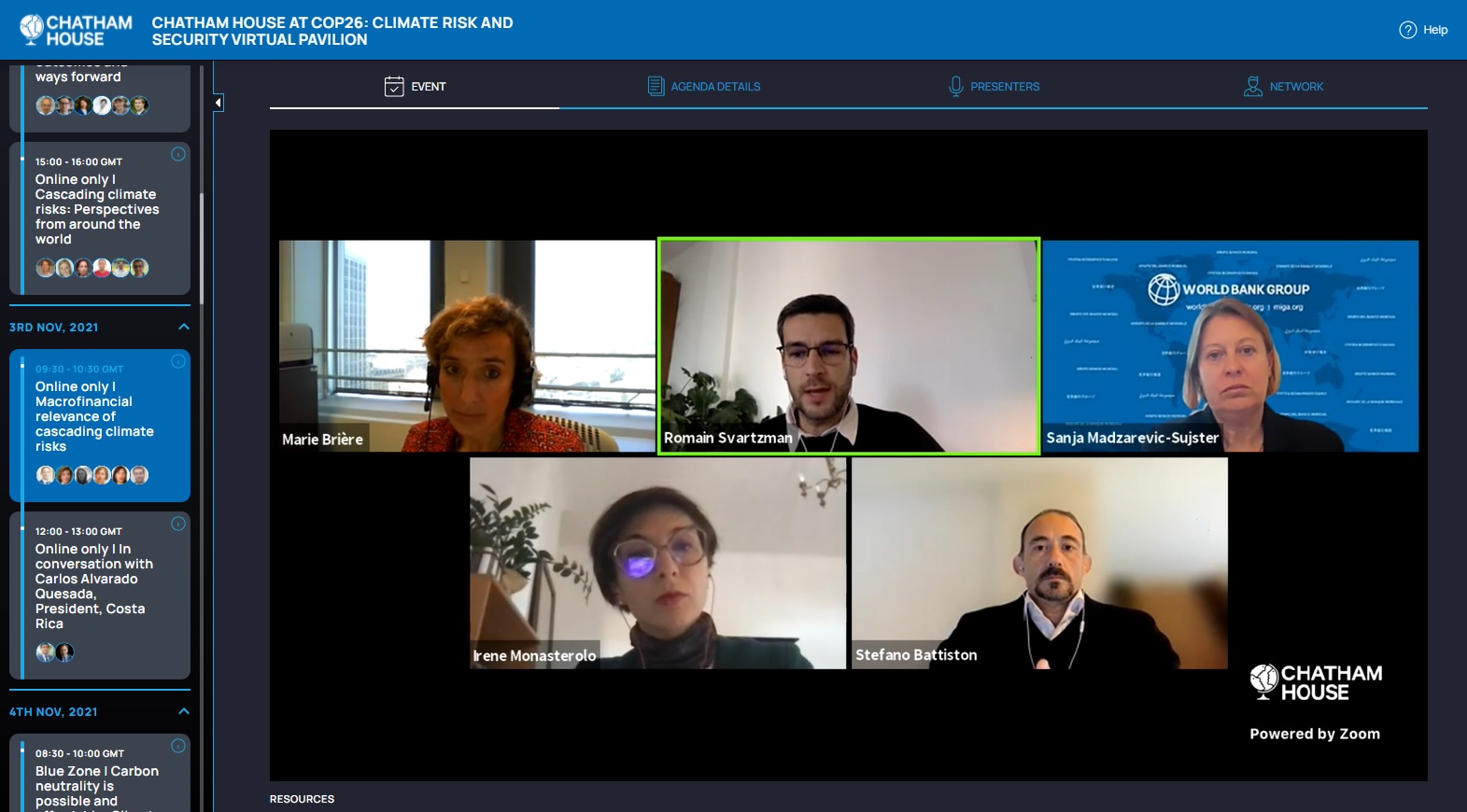 Referring to a recent paper, IPCC Lead Author Stefano Battiston pointed out that not only does climate risk depend on the emissions path we take, the reverse is also true: the emissions path we take is affected by our collective assessment of risk. This feedback loop explains the importance of the expectations of financial actors in understanding the future evolution of climate change risk. Marie Briere of Amundi picked up the theme and explained how actors within the financial system can be ‘shock amplifiers’ – withdrawing from disaster-hit countries and companies at the worst possible moment, precisely when they’re needed most, contributing to instability and overall systemic risk. 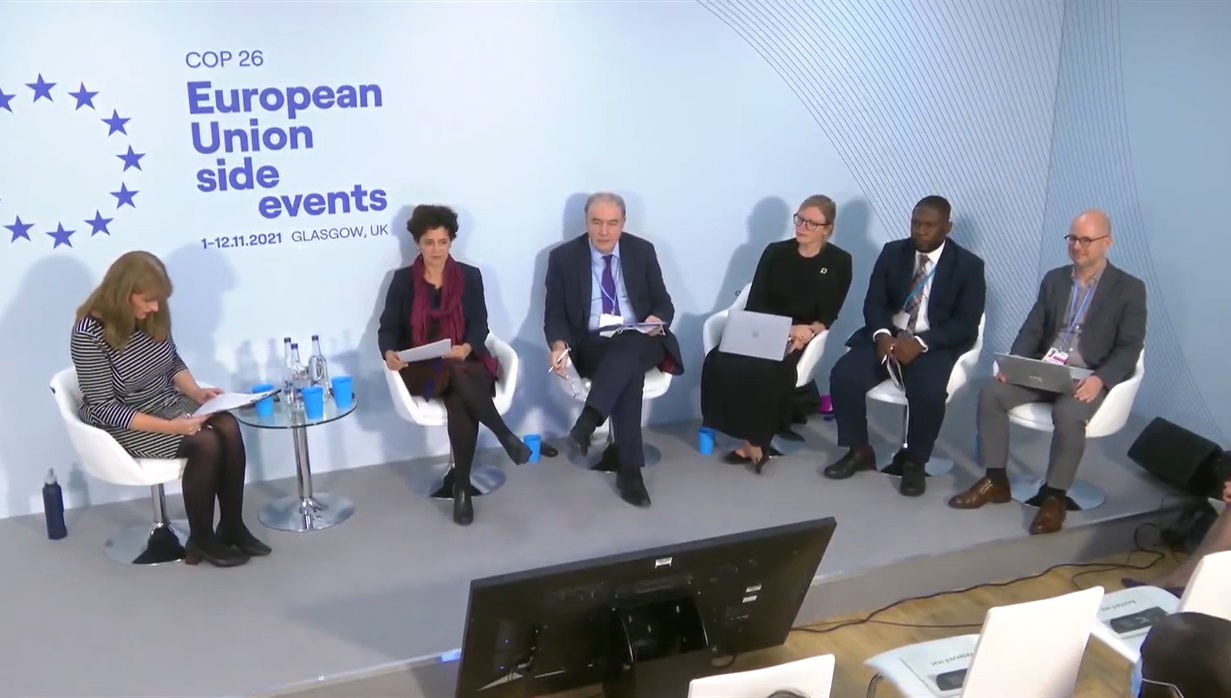 Taking place in the European Union Pavilion on Tuesday 9th November, Adaptation Beyond the EU: Perspectives for Stronger Cooperation with Africa looked at the new EU Adaptation Strategy, which underlines the need to better link the internal and external dimensions of adaptation with partner countries, particularly in Africa.

Kwamie Adabio of the African Union Development Agency highlighted how climate change in Africa was reducing agricultural yields, which was in turn driving rural-urban migration. He emphasised the importance of adaptation initiatives which are bottom-up and rooted in local knowledge. 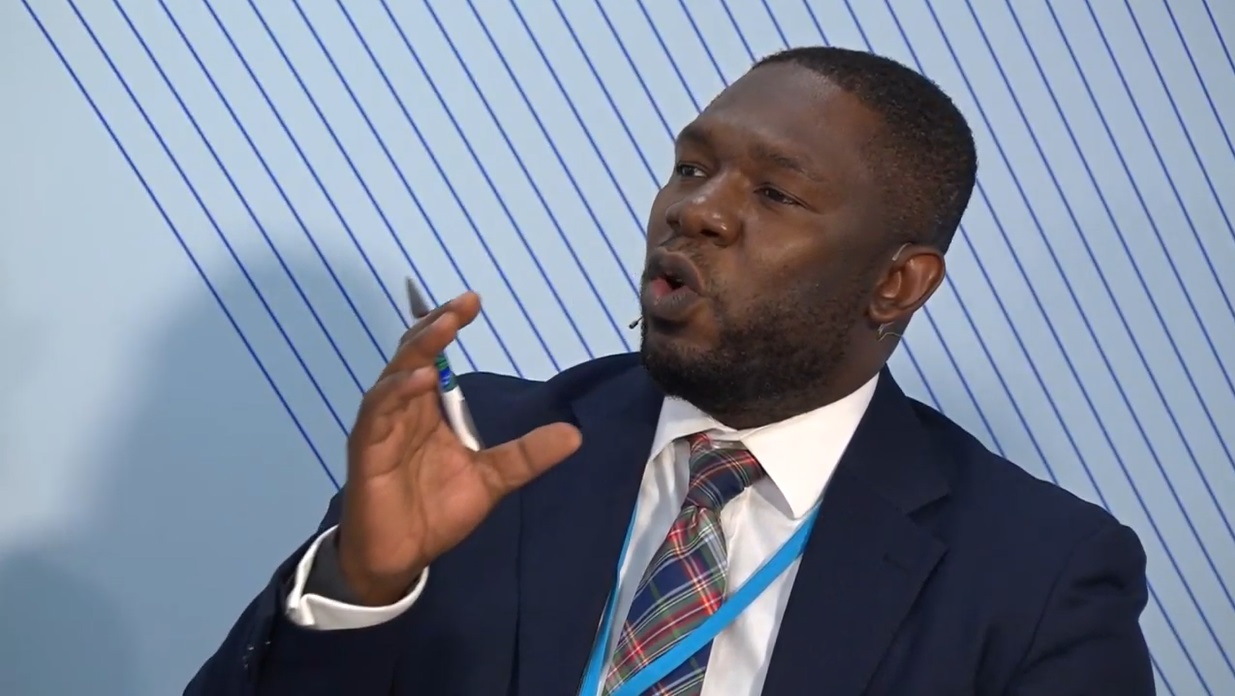 Hanne Knaepen of CASCADES and ECDPM echoed this call for a bottom-up approach. Noting that “we are only as resilient as the most vulnerable among us”, she highlighted the importance of inclusivity, international cooperation, and above all, urgency in the face of climate impacts that are affecting communities in the Global South today.

Katy Harris of CASCADES and SEI used the example of Senegal and its dependency on imported rice from South East Asia to illustrate how climate change impacts in one region could easily cascade into others. She said it was encouraging that the EU strategy explicitly acknowledges that local climate impacts can have regional and global repercussions, and advocated for a more collaborative approach to adaptation. 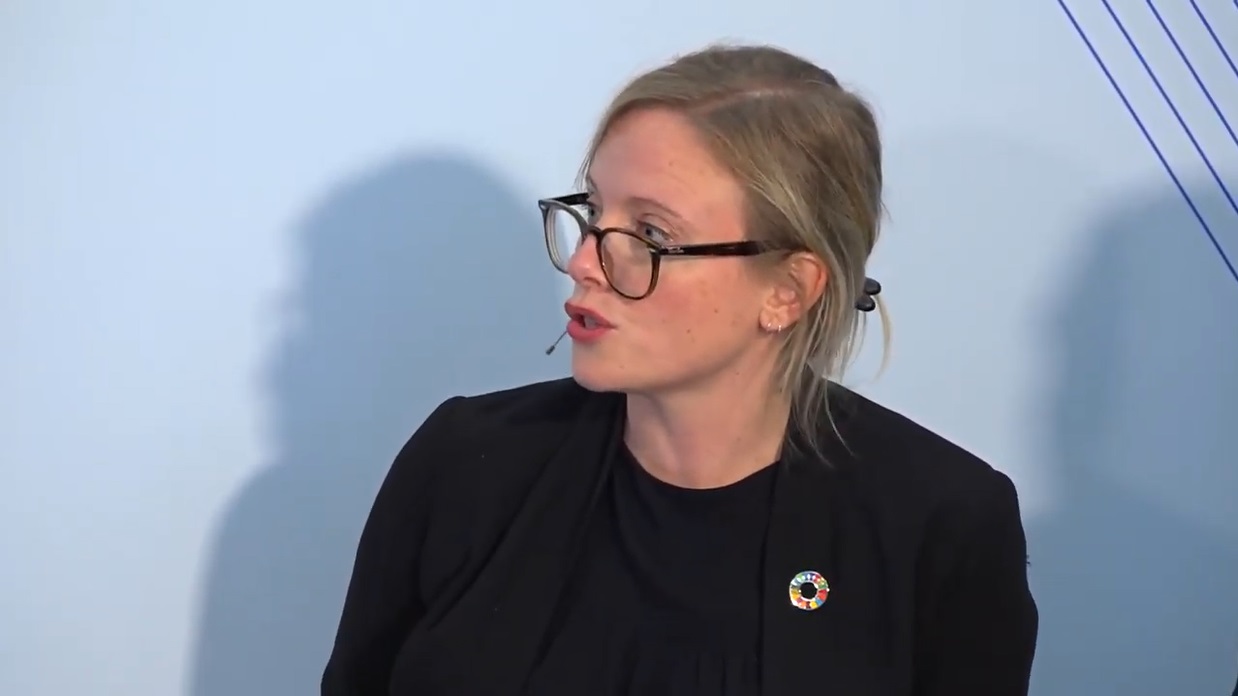 Climate Resilience in Intermediate Cities of the MENA Region: Opportunities for the European Green Deal was held on Thursday 11th November, on COP26’s “Cities, Regions and Built Environment” day. It saw the launch of a new CASCADES research paper on climate vulnerabilities in intermediary cities in the EU’s Southern Neighbourhood, which was presented by two of its authors, Chatham House’s Karim Elgendy and CIDOB’s Hannah Abdullah.

Presenting the paper, the authors advocated for systemic approaches to increasing urban climate resilience by strengthening the Water Energy Food (WEF) nexus, as well as other enabling factors such as decentralization. They also outlined recommendations on how the external dimension of the European Green Deal can help cities in the region adapt to climate impacts, based on a WEF nexus approach. 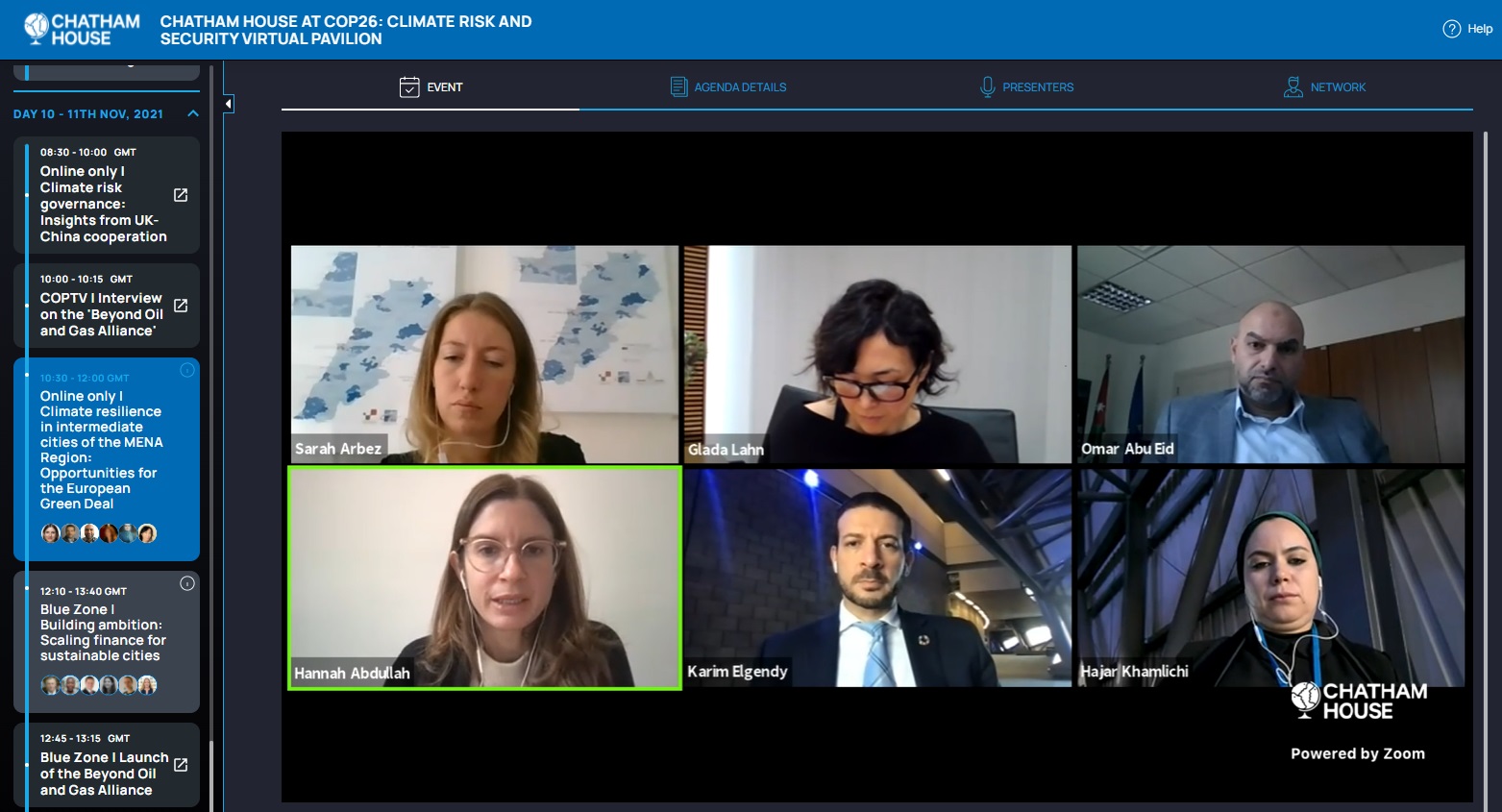 Three panellists from the region responded to the findings of the paper. Hajar Khamlichi of the Mediterranean Youth Climate Network provided a perspective from Morocco, citing the example of Marrakesh as somewhere that, although not explicitly mentioning the nexus in its recent climate plan, had taken important steps in that direction. Sarah Arbez of United Cities Lebanon emphasised the role of local authorities in building climate resilience, and showcased some notable locally-spearheaded initiatives which have improved environmental management. Omar Abu Eid, of the EU Delegation to Jordan, talked about the tenets of the European Green Deal and how they are being implemented in the region, from greening the energy system to efficient resource use, and the increasing integration of circular economy principles. 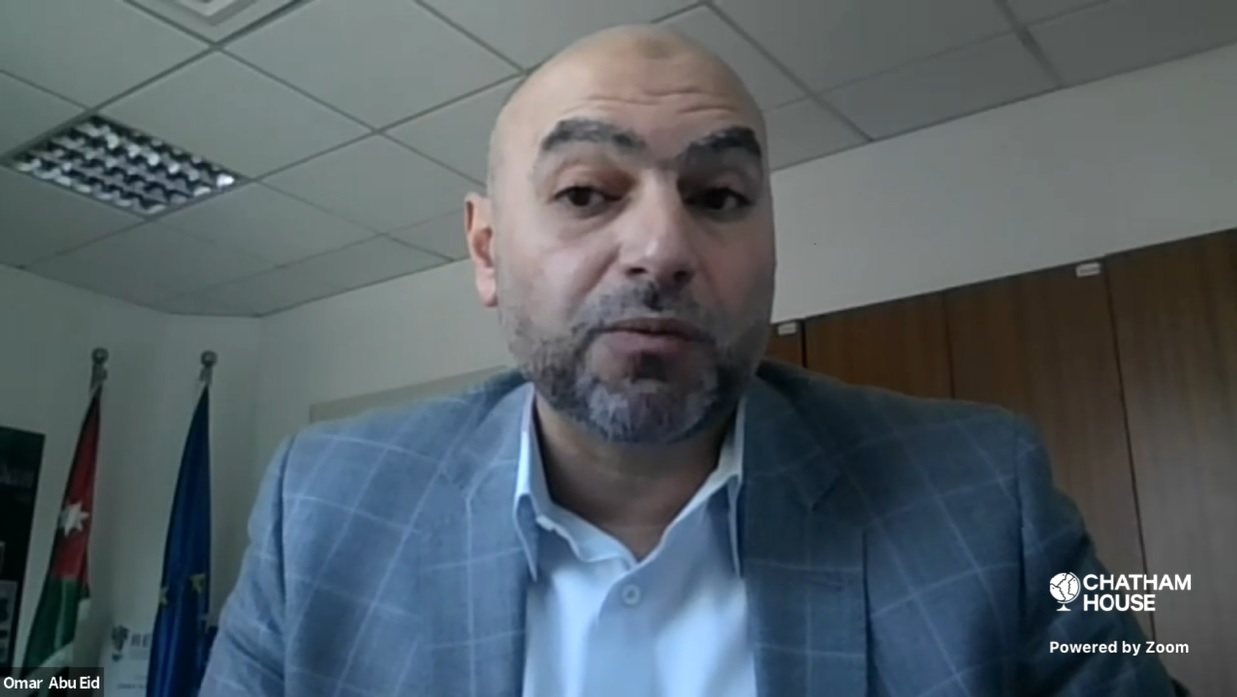 In addition to the events above, the public was invited over COP26 to try the Cascading Climate Impacts Policy Simulation, a ‘serious game’ which aims to bridge the gap between science and science users, and to create an environment for navigating complexity in a meaningful way. The simulation enables participants to experience a potential sequence of cascading climate events that start in a specific place but can result in risks on different continents. 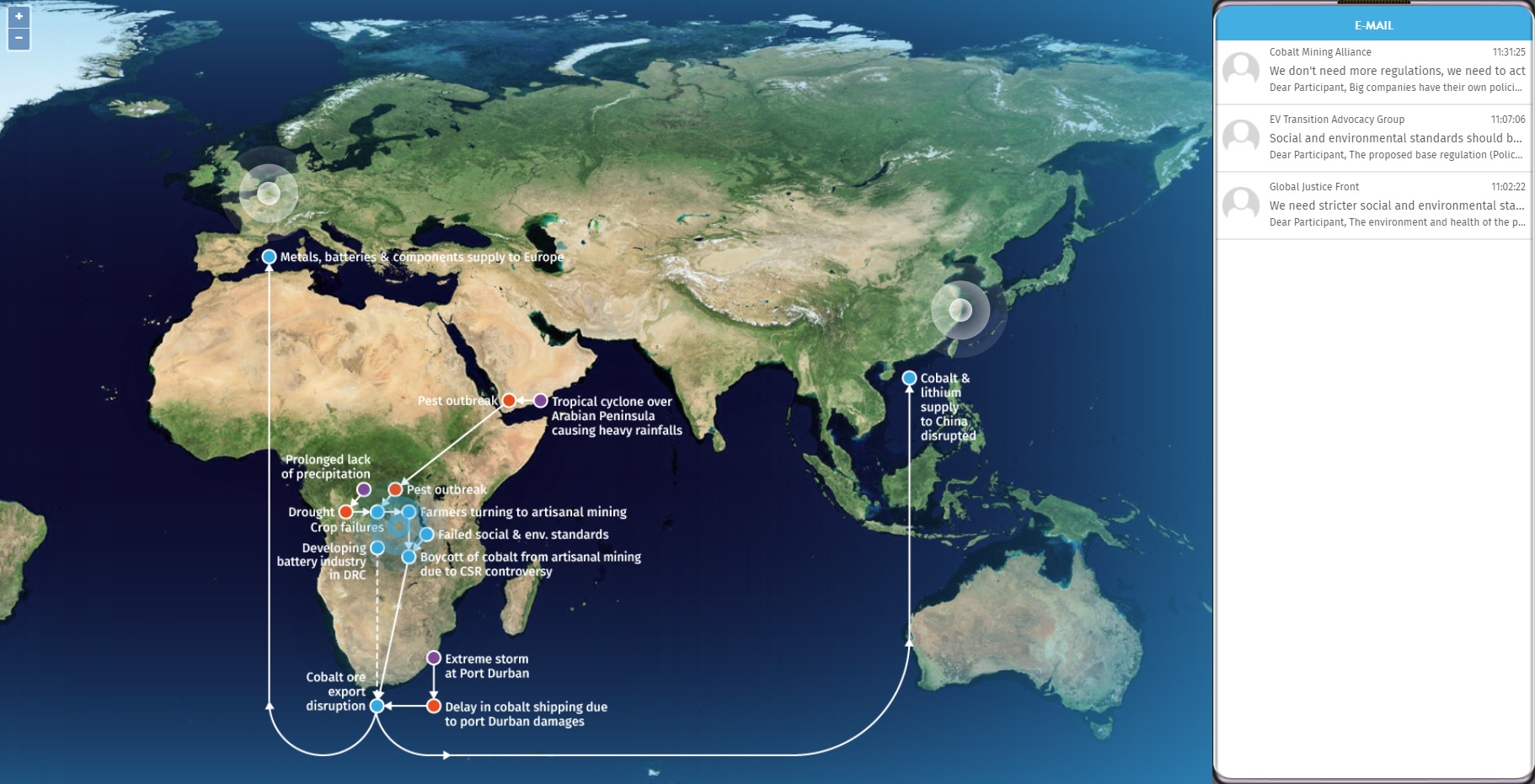 The simulation is arranged within a virtual conference centre, as a series of collective decisions preceded by several meetings and discussions. Participants assume roles of representatives of various countries and organizations responsible for global safety and well-being. In these roles, they explore several interactive storylines offering diverse perspectives.

They are confronted with a scenario of dramatic events caused by and connected to the climate crisis. The participants are invited to work together to decide on policy propositions for counteracting the emerging crises. The immersive character of their experience stimulates imagination, invokes emotions, encourages learning and knowledge sharing, and motivates action.

We hope that you were able to join us for our events on cascading climate risk over COP26. If you missed an event or would like to re-watch, you can do so through Chatham House’s Climate Risk and Security Pavilion.

Reflections from our first stakeholder workshop

The EU adaptation strategy is everybody’s cup of coffee